carry on M-Museum took place, November 2015, at the Leuven based Playground Festival, a crossover disciplinary festival organized by artscenter STUK and M-Museum. During the whole festival carry on was intalled and performed in the large entry hall of the museum, interacting with its architecture, functions and visitors.

With carry on Heine Avdal and Yukiko Shinozaki conceive of space both as a memory and as a generator of movement.

With carry on M-Museum Heine Avdal and Yukiko Shinozaki entered a new stage of their exploration of space, developing further their performance project distant voices (2014) in form of an installation. The modular sculpture of white cubes, which was manipulated and transformed by six performers in distant voices, continually shaping and reshaping the spaces in which the performance’s different versions were presented, now became the substratum on which an audiovisual multiplicity of texts, sounds and images were sprawled.

What formerly had been the means and the medium of – as the performance versions were entitled – conversations between audience members and performers now transformed into an environment in which each beholder’s perception establishes a specific constellation. Traces of former movements trigger the emergence of new ones – both physical and psychical.

To the same degree as the installation was grounded in distant voices, it also exceeded it. carry on is as well a continuation of distant voices by other means as it is an exploration of spaces into which distant voices has not reached yet.

As distant voices opened up the time frame of its performance by going over to an informal setting in the end, carry on M-Museum literally carried on in this respect by inviting its visitors to involve in an enduring arrangement where they both find remainders of former actions as their visit leaves traces of its own.

In this sense, the installation is a choreography in itself, its visit becoming a dance of perception. Between cubic objects and three dimensional letters, which wryly echo the aesthetics of minimal art, and in combination with triggered sounds and temporary live actions carried out by performers, the visitors can discover a multiplicity of audiovisual elements which establish and/or suggest different relations between them, the performers and the surrounding space/objects.
carry on is not only an installation, but rather an installative process, carrying on not only with regard to distant voices, but also and especially in itself. 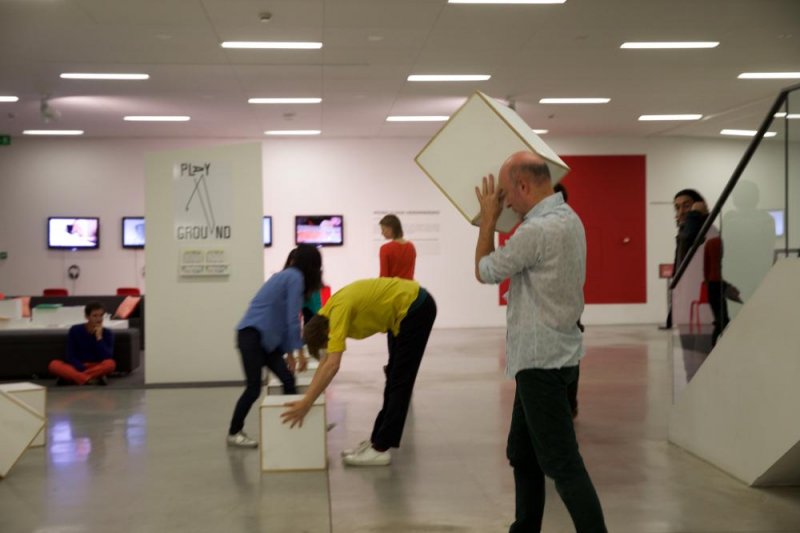