A ritualistic concert in which everything is set in motion. Elements of the performance space become part of the ritual and the movements, and they serve as the physical manifestations of the musicians' thoughts and their interactions

The audience does not attend a concert but rather participates in a ritual. The purpose of this ritual is unknown to them, but it is clearly of utmost importance. In THE OTHEROOM, everything moves. The musicians, part of a wind quartet, do not have a fixed place in the performance space. There are no chairs, the audience is free to move or be moved. The elements of the room become part of the ritual, are set in motion, and serve as physical manifestations of the musicians' thoughts and interactions.

The life of a musician is quite peculiar, as he or she spends most of his or her time in solitude, practicing an instrument to perfection, studying intricate compositions. Then, he/she joins other musicians, and is suddenly expected to respond hyper-sensitively, almost telepathically, to other musicians, and to merge with them into a larger unity, larger than the simple sum of its parts. THE OTHEROOM, besides being a ritual in and of its own right, celebrates this extraordinary capability.

'5against4' on THE OTHEROOM at Huddersfield Contemporary Music Festival
...in addition to being thought-provoking and immersive, it was also enormous fun, never spilling into a farrago of absurdist-imbued novelty but simply revelling in the sheer joy of pulling physical and sonic shapes. Breathtaking and beautiful, its final masterstroke was genius, the players and curtain processing together outside and continuing to cavort in the street, bringing the people of Huddersfield to a halt no less stunned and mesmerised than we had been inside the Town Hall. It was all really quite incredible


THE OTHEROOM was nominated for the British Composer Awards in the category 'Sonic Art'. 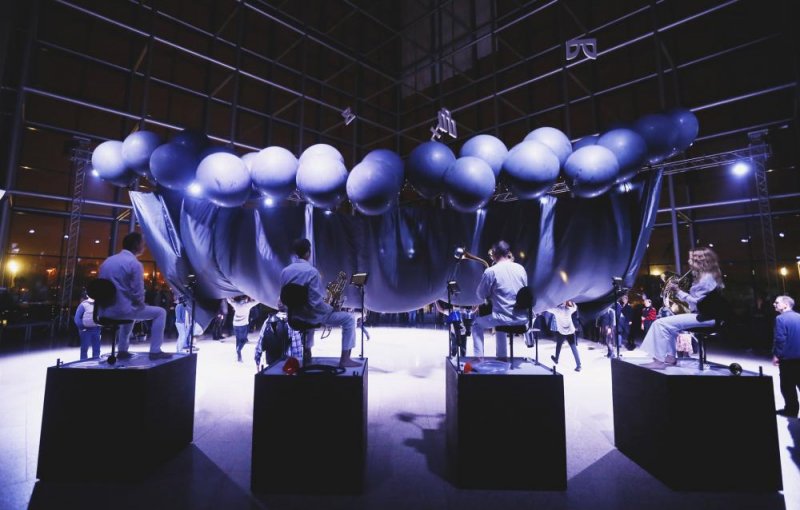